The Kavalan Distillery in Yilan, Taiwan, receives up to 1 million visitors per year; up to 10,000 may cross the doors of their Spirit Castle visitor center on a single national holiday.

While most guests to Kavalan hail from Taiwan or elsewhere in Asia and have a decidedly shorter trek than my roughly 30 hour door-to-door trip, western tourists certainly get in on the fun as well. It’s a pilgrimage of sorts, getting to one of the hottest sites for whisky production across the globe. Hottest, of course, referring both to the blazing Taiwanese heat, as well as the buzz-worthy status of the brand. 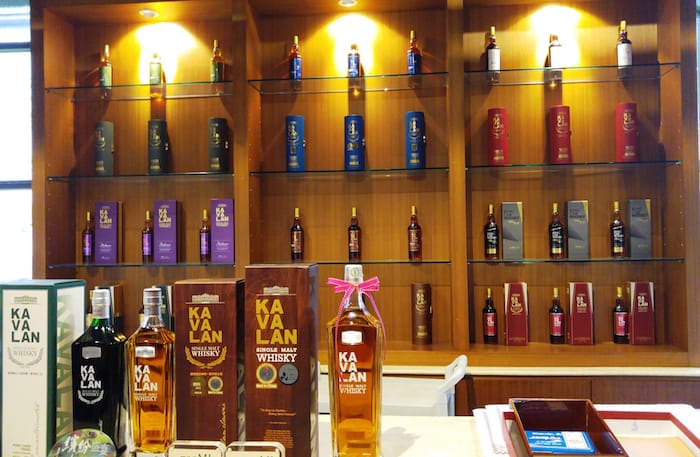 To put that visitor count into perspective, the entire Kentucky Bourbon Trail reported nearly 900,000 visits in 2015. That’s across their nine main members, representing the historic big name distilleries in the state, as well as the 10 additional stops on the craft portion of the tour.

Kavalan has managed to not only build a global whisky juggernaut in a decade, but also to create an entirely new destination for whisky tourism. This is perhaps as much of an instructive point as anything else as to how everything at Kavalan is done big, done quickly, and done precisely well.

The air around Taiwan’s northeast coastal region may best be described as oppressively sticky, and that combination of heat and humidity produces unique aging conditions for whisky.

“The huge reason is the heat of Taiwan, it’s subtropical,” explains Ian Chang, Kavalan’s master blender and the face most commonly associated with the brand. Chang learned under Dr. Jim Swan, Kavalan’s consultant who helped set up the distillery and maintains twice yearly visits.

Without any prior experience in the whisky industry though, Chang also spent three years in Scotland learning the art and science of whisky production. “Once I joined the company, they sent me to Scotland to learn the trade and everything,” says Chang. “Even though we have Jim Swan as our consultant, it still took time for us to learn how to improve quality in the heat.” 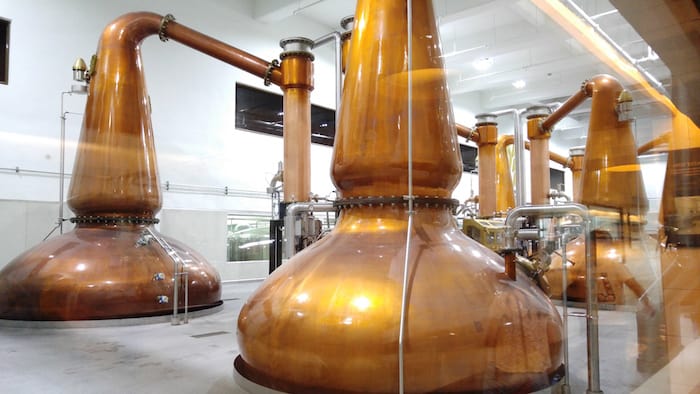 Before the whisky is even distilled, the heat is already impacting Kavalan’s processes in ways that were difficult to forecast until they were experienced firsthand. For instance, temperature controlled stainless steel wash backs are now utilized to properly maintain and control the delicate fermentation process.

Two types of yeast are used for their fermentation. The first, a French strain, is put to use to produce a maximum yield. In the middle of the fermentation process, they then incorporate a South African yeast to provide more of their desired flavor. The resulting distiller’s beer rests between 8 and 8.5% ABV.

Kavalan then uses an array of Forsyths copper pots, with 12,000-liter wash stills and 7,000-liter spirit stills. In addition to their current allotment, five fresh sets of stills are en route, boosting their production capacity to a massive 9 million LPA, instantly placing them amongst the largest single malt distilleries in the world – after just 10 years.

While the temperature affects many aspects of whisky production, it’s first and foremost felt during maturation. “With the heat, we have high extraction of wood,” says Chang. “We can manage to produce whisky with very dark color and also a good amount of wood flavors in a much shorter time.”

Four years in the Taiwanese heat represents at least 10 to 12 in Scotland, and while all Kavalan releases are NAS, four years is the brand’s minimum. Depending on warehouse location and cask specifics, 4-6 years could actually represent an equivalent of 15-25 years or more.

Their oldest whisky in the warehouse is all of 10 years, stretching back to the small amount of stock remaining from the distillery’s opening in 2006. It’s not for a specific project in mind, either. According to Chang, their first runs of new make simply weren’t very good, so they’re just waiting it out to see if anything develops.

The bottom floor of one of their five-story warehouses may be roughly 75 to 80 degrees, while the top floor routinely rises above 110 degrees. They close the doors to their warehouses between June and October, but otherwise use no temperature control. 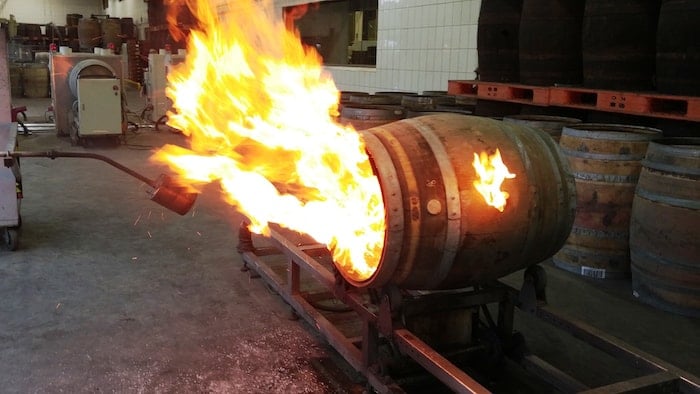 A Kavalan whisky barrel being recharred. (image via Jake Emen)

Placement in the warehouse depends most importantly on the size of the cask being used. “As the sizes of casks become bigger and bigger, we move them higher,” says Chang. The increasing heat speeds up maturation for larger casks which would typically need more time.

The maximum amount of time Kavalan will age whisky in one of their ex-bourbon casks, even on the relatively cooler, lower floors, is six years. “It all depends on the sizes,” says Chang. “We think that for a bourbon cask, if we mature our whisky for more than say six years, then I think quality will start to go down.”

Flavor extraction may not be impacted by the humidity, but the angel’s share certainly is, with annual levels approaching 15%, and that thirst makes a big difference in concentration of alcohol in the barrel. “With high humidity, we therefore lose more alcohol,” says Chang. “Proof is going down,” over time as a result, with more alcohol evaporating comparative to water.

Kavalan currently has just two warehouses, with several more on the way in coming years, and a total of 60,000 barrels currently maturing. Considering their prodigious production capacity, it’s a tiny number of barrels, again thanks to how quickly the maturation process can be completed.

Approximately 60% of their aging stock is in ex-bourbon casks, with the rest encompassing the full arsenal of cask types that the brand is known for, from brandy and port to a full smorgasbord of sherry casks.

“We try to use as many casks as possible to modify our character and complexities,” says Chang. He believes having that diverse portfolio of casks enables them to produce the equivalent of Scotch blends which would otherwise be sourced from a handful or potentially dozens of distilleries. He describes the single cask Solist series as single notes of music, whereas the entire warehouse is a symphony once put together properly.

Even the sherry casks Kavalan uses, however, are made from American oak. “We use almost 99.9% American oak for our barrels,” says Chang. Once again, it’s the heat. Chang explains that American oak imparts a more “delicate” flavor to their whisky, while European oak leads to “bitter and astringent” flavors in their conditions.

The distillery also has an on-site cask reconditioning facility. Here, they practice what they call STR, or shaving, toasting and re-charring. Chang notes the toasting phase as “the key part” of the process, helping to free organic compounds from the wood, among other benefits.

It’s just another of the many specific protocols the brand has put in place to gain an edge. “Being a young company, we don’t have the history… so technology is the best way to compete,” says Chang.

Kavalan currently has a six-person group devoted entirely to R&D, and Chang says the brand was the first to use an STR style process on wine casks. They deployed it for their Vinho Barrique, an expression named  the “World’s Best Single Malt Whisky” by the 2012 World Whiskies Awards.

Kavalan has seven whiskies available in the U.S. right now, with four new releases hitting our shorelines this fall: Solist Amontillado, Solist Manzanilla, Solist Pedro Ximenez, and Solist Moscatel. As members of their Solist range, they’re all cask strength, single cask whiskies, with each ending up between 55% and 58% ABV. The Solist Amontillado has already garnered an award from the World Whiskies as the 2016 “World’s Best Single Cask Single Malt.” 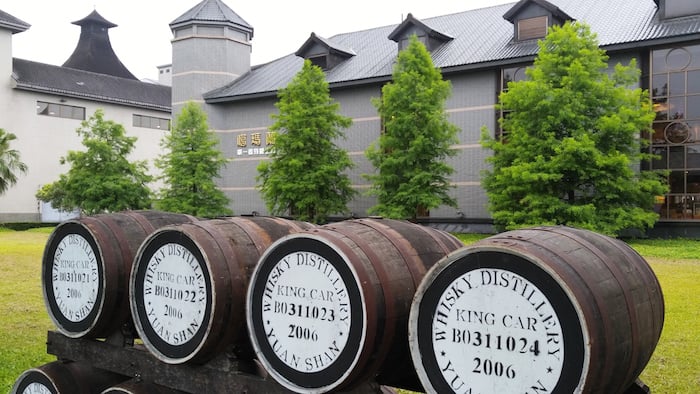 Outside the Kavalan distillery (image via Jake Emen)

While sherry influence is noted in all of the new whiskies, they each revealed a highly distinctive character during a distillery tasting session. The Amontillado is light and shifts from honey to toffee and spice; the Manzanilla is nuttier and darker; the PX creamy, rich and sweet; the Moscatel is the lightest yet and floral on the nose.

At the distillery, there’s also a chance to gain another glimpse at the future for the brand, including a newfound focus on peat. Available for purchase at the Spirit Castle is a distillery-exclusive peated-cask whisky, and meanwhile, Kavalan currently has peated mash bill whisky being aged in four types of casks.

For those, they have used peated barley with 20 phenol PPM, which Chang says results in a final spirit with a level of 10 phenol PPM. Chang has also been busy on scouting trips, saying he recently visited Independent Stave and is planning a virgin oak series with new barrels.

A mere decade into their existence, and Kavalan has already set a lofty standard. That’s a tiny fraction of the time that Scotland’s, and even Japan’s, top single malt distilleries have been in production, and it signals that the best is still yet to come for Kavalan. If you’re not up for the rather lengthy trip to the Spirit Castle in Taiwan, then it’s time that you at least try to track down a few bottles for the personal stash.

25
Shares
1.4k
Views
Share on FacebookShare on TwitterGet Our Newsletter
Get The Macallan® Rare Cask at ReserveBar. Shop now!