FEW Spirits: The View From a Mid-Sized American Whiskey Distillery

When one looks across the landscape of the American distilling scene in this day and age, one encounters hundreds upon hundreds of distilleries spread across the different states. Some are quite large, such as the Kentucky bourbon producers, while the vast majority of the rest are small guys, perhaps just now getting their feet wet with white whiskey off their stills.

Somewhere in the middle between these two flagpoles sit the medium size American distilleries. While it is a little hard to define exactly what that means given the rapid rise of the craft industry, it is safe to assume operations such as Westland, House Spirits, Balcones, Koval, and FEW, just to name a few, fall into this niche. Big enough to have gotten past their initial growing pains, but still small enough to be nimble and innovative, this rising category of distillery is helping set the tempo of craft distilling today.

To get a bit of perspective from one of these distilleries, we sat with FEW Spirits founder Paul Hletko during Tales of the Cocktail to find out what he’s up to and how the industry looks at the moment from his perspective. Note this interview has been edited for clarity and brevity. 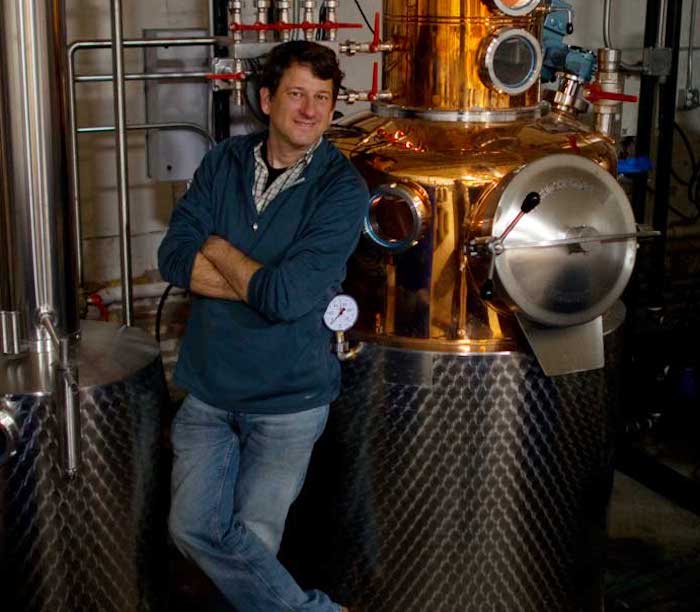 The Whiskey Wash: So let’s talk a little bit about FEW Spirits first. When was it founded?

Paul Hletko: FEW started up about six years ago with sales [and] we’ve been able to kind of grow the business up a little bit. We’re based in Chicago, technically Evanston, Illinois. We’re now distributed across about 28 states, about 30 countries and across four continents.

TWW: FEW Spirits has a range of products with your focus seeming to be on whiskey. Can you talk a little bit about what whiskey you guys are producing?

Hletko: Our core products are whiskey, primarily the FEW Bourbon and the FEW Rye Whiskey. We also have a couple of gins that are just really wonderful gins, but our core products are the bourbon and rye. The FEW Bourbon is a really unique bourbon, very spicy with a lot of cinnamon and clove, and in contrast the rye whiskey tends to be a little bit fruity, because we use a wine yeast for the fermentation, and that’s gonna give a little bit of those winey kind of flavors.

TWW: Do you follow a pretty consistent mash bill and standard aging process for the bourbon and the rye? Or do you vary those somewhat from batch to batch?

Hletko: Our mash bill remains consistent across the board, always has been, and we intend it always will be. Our mash bills are 70/20/10, large grain, small grain, and then malted barley. So on the bourbon 70 corn, 20 rye and 10 malt, and on the rye, 70 rye, 20 corn, and 10 malt. And you’ll find that that’s a great mash bill that gives you all of the big grain you want, but there’s still enough of the small grain to provide some flavor and texture, and obviously 10% malt means that you can actually get a fermentation, which is kind of the key to having a fermented beverage.

TWW: Is the aging about the same from batch to batch?

Hletko: Age of the barrel is just one number. What really matters is the flavor, and we produce our whiskey…with other characteristics in mind as well. So I wouldn’t say that there’s any aging regimen that we have, but what we have is a different approach to try to mature our whiskey and produce it that way.

We use a variety of different size barrels across different timelines. I think that’s one of the things that helps make us stand out and makes our products unique. The fact that we actually make all of our own whiskeys all the way from scratch, really helps us to control and make sure that our products are unique in the marketplace.

TWW: In addition to the bourbon and the rye, you guys have some occasional other types of whiskey releases such as your single malt. Can you talk a little bit about those?

Hletko: The single malt’s a wonderful product. I suffer or enjoy, depending on your perspective, from a raging ADD, and so we like to be able to create. Certainly one of the things that I think is the hallmark of FEW Spirits is the creativity, and so we do limited batch releases from our once yearly single malt that we release in October.

We’re also launching a new product coming up this next spring, which will be an American whiskey, which is a really, really fun product. On top of that we tend to do other small batch releases that will be distillery-only releases or we’ll release only in various markets. We’re working with some friends in the UK to do some one off batches there. We did a collaboration with the rock band The Flaming Lips, and that was really fun.

TWW: So you guys have become a pretty well-established medium sized distillery. What does that mean for you in this marketplace? Is it changing, evolving?

As we’ve been able to have a little bit more scale it helps us to fund the sales department a little bit better. It helps us to produce a little better marketing. But at our core what we are is people that really, really love distilled spirits, and we love making it. We get up in the morning, we smile on our way in to work. On our way home we smile after a day’s work well done.

TWW: Given your relative age in the market as a very solid, middle-sized distillery, you have a good viewpoint of the evolution of the American craft market. Can you talk a little bit about the state of craft whiskey today?

Hletko: I think the state of craft whiskey is absolutely thriving. A a lot of people share the same passion as we do. You’re seeing a lot of truly amazing whiskey being produced, inventive, creative, unique different whiskeys that are providing the whiskey consumer an unparalleled selection in choice.

TWW: When you look at the craft whiskey market by segment in terms of type of whiskey, do you think there’s innovation going on in one category more than the other? Or would you say it’s pretty spread across, say, bourbon, rye, single malt, etc?

Hletko: I think we’ve seen a lot of innovation kind of extending across. Certainly the American single malt category is taking off. Historically, there really wasn’t an American single malt marketplace. Nobody bought it. So with the rise of a lot of craft distilleries focusing on it, we’ve seen a lot of really great products that maybe wouldn’t have even been on the market 20 years ago.

TWW: We’re seeing  this flood of distilleries in the craft segment coming online. What does it take to survive in the craft whiskey market today?

Hletko: If I knew what it takes to win, I’d be a rich man. I don’t know. I think it has gotten a lot harder over the last couple of years. The number of participants is challenging, just because I think it makes it a lot harder for any individual company to maintain. I see a lot of people come out, and they fill their first order from the distributor, and the distributor orders again just like three weeks later, and the distiller’s like, “Oh my god. We got all this crazy demands.” And then the second order from a distributor takes six to eight weeks, and now the distiller is just over the moon because, “Oh, it’s amazing.” And then the distributor stops ordering, because their pipeline has already been filled, and it’s not pulling off the shelves, and then the distiller gets confused as to why they’re not ordering, and it’s the distributor’s fault and yada yada.

I think change is happening very quickly, and the people who are better prepared for it and understand the way the system works are gonna be able to survive, and people who maybe get a little bit confused about all sorts of business aspects are gonna find it a lot harder to survive. But there is an awful lot of opportunity for the whiskey consumer to have this access to products they would not have had before.

TWW: From your perspective, what makes a good craft whiskey?

Hletko: I think what makes a good craft whiskey is obviously quality. If you don’t have quality, you’re not gonna survive period. But from there it gets a lot more interesting, because what it makes it good is, “Why is it different? Is there a unique approach to the mash bill, a unique approach to the fermentation? What’s different about it?” You have to have your own take on whiskey – it is just not interesting.

Or whatever the story is, but story only gets you so far. You have to be able to back it up with something that is going to justify that price point, and what’s gonna justify it is gonna be what’s in that glass. That could be very challenging to provide that sort of value proposition if you’re not ready for it.

TWW: We’re here at Tales of the Cocktail conducting this interview, and obviously there are some people from the industry here. When you look at how the liquor industry as a whole is evolving, do you think it’s evolving well? Evolving too fast? Too slow? And why?

Hletko: I think too fast and slow depends on perspective. At the end of the day the consumer and the people who are actually buying whiskey are the ones who need to win, because they’re the ones who are spending their dollars. And so to the consumer theoretically it’s working very well, because the consumer is being provided with an awful lot of choice, and they can make their choices properly.

On the flip side it might be a little bit too much choice, a little bit too much fast. You know, the paradox of choice is an old psychological experiment, and it doesn’t necessarily hold good results for either consumers or producers, because consumers end up missing out on a lot of products that they might otherwise like, and then producers end up missing out on sales that they might otherwise enjoy as well.