Did you hear that Denny Potter is now master distiller Heaven Hill Distillery?

No, you probably didn’t. Even at America’s largest family owned distillery, things sometimes happen quietly, without ceremony or press release or public proclamation.

Though Heaven Hill declined to comment on the matter of Potter’s ascension to one of the industry’s top posts, it’s likely the matter was kept quiet out of respect to Parker Beam, its legendary master distiller, who lost his battle with ALS in January. Three months after his passing, employees of Heaven Hill say his death was like losing a father and brother, a sentiment echoed by Potter.

“It’s just going to be odd over the next few months making our way through this,” Potter said. Beam’s son, Craig Beam, former co-master distiller with Potter, continues to serve in a consultant’s role for the company. “Parker’s passion for this business was there until the end, even though he wasn’t able to do what he used to. Working with mentors like him meant a lot.”

In more than two decades working in Kentucky distilleries, Potter’s mentors have been dandies. While at Beam Global, he worked with master distillers Fred Noe, III, at Jim Beam, and Steve Nally at Maker’s Mark, and as both brands underwent major expansions.

Similar growth is one of many challenges Potter faces now in overseeing expansion at the company’s Bernheim Distillery in Louisville. That facility is being outfitted with a new column still, while multiple 55,000-barrel rickhouses are under construction outside of nearby Bardstown. 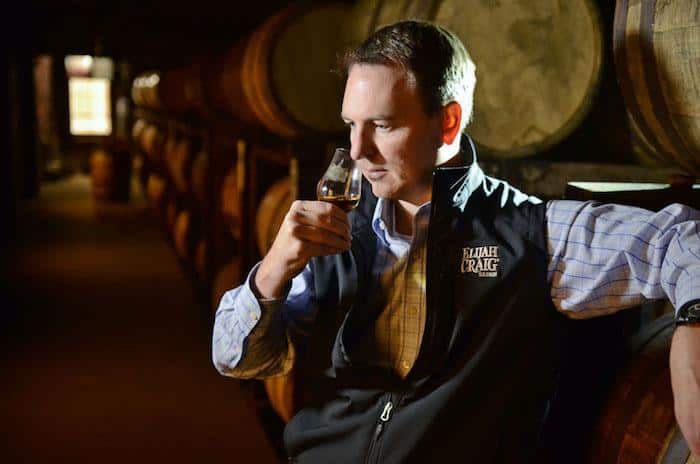 “Currently we produce 310,000 barrels a year, and expansion will get us to more than 400,000,” Potter said. The new still is expected to come online this summer. “So we’re basically building a 100,000-barrel distillery—all to feed existing brands.”

At 43, Potter is one of the emerging new guard leading operations at Kentucky’s historic bourbon distilleries. Joined by forty-somethings Greg Davis (Maker’s Mark), Brent Elliott (Four Roses) and Harlen Wheatley (Buffalo Trace), he and his peers must meet crushing consumer demand for base products while innovating with new ones. Potter summarizes his job as “mostly not screwing up brands like Elijah Craig and Evan Williams … but having fun innovating, too. It’s a lot on my plate.”

It’s also sitting through demand forecasts, when “you’re thinking about making X amount of barrels to supply Elijah Craig 18-year 23, and thinking, ‘I might not even be working when that’s ready to sell.’ That blows my mind.”

Making whiskey, he said, is almost easier than figuring out where to store it inside Heaven Hill’s 50-plus rickhouses once it’s barreled. Add to that, no one has any idea what consumers may want two decades from now.

“It’s almost impossible to get those forecasts just right,” he said. “So you’re always wondering whether you’re making the right decisions.”

Stressful as it is, Potter calls his work “a dream job. The last thing I’m ever going to tell you that it’s a job that people wouldn’t want.” He never envisioned himself a distiller when earning his bachelor’s in biology at Indiana University. He later earned an MBA at Indiana University Southeast. “Who the hell would have thought of that, that this would be my job?”

Or that his closest competitors would be some of the nicest people he knows. Master distillers are a friendly lot, he said, and all support each other at public events.

“If we were representing Pepsi and Coca-Cola, we’d not even be in the same building together,” Potter said. “But if I’m talking to Eddie Russell at WhiskyFest, I’m at his table or he’s at mine. And if he’s at mine, he’s drinking Elijah Craig 18-year, our whiskey. That’s so rare to see in other businesses.”

Few executives at his level also meet end-users who share opinions about their products. Be it whiskey fans at festivals or bartenders asking for help getting specific products, everyone has an opinion and it’s often a complaint about not having enough.

“I go to Chicago at least twice a year, and you don’t hear mixologists saying they can’t get Elijah Craig 23, they’re saying, ‘Dude, just bring me a case of that Heaven Hill Bottled-in-Bond,’” Potter said, referring to the brand’s 6-year-old white-and-green label bourbon sold only in Kentucky. Their ire is equaled on rare occasions when supplies of the company’s Rittenhouse Rye sometimes get lean. “I don’t blame them for being upset that they can’t get the bonded. They can make a $15 cocktail with that bourbon from a bottle that only costs $12. … But I really like that you have to come to Kentucky to get this whiskey. It makes it special.”

Potter said his friends seem more impressed with his title than he, and that they embarrass him a bit when they say to their friends at bars, “‘My buddy here is the master distiller at Heaven Hill.’ Like that’s going to do anything for them,” he said. “I think others get a bigger kick out of it than I do because it’s not a title I’d have ever given myself. The Shapira family asked me to take it on, which was an honor and a validation of the work I do.”