Journeyman is a distillery pioneering the Midwest craft spirits scene by experimenting with large risks that are procured by gradual steps. Inside their distillery sits a barrel marked Date Filled: 8-3-10. The rye whiskey aging inside the cask is from the distillery’s initial batch. Founder Bill Welter crafted the rye whiskey while working with KOVAL Distillery in Chicago. “He (Welter) wanted to have aged spirit when he opened the doors here,” explains Production Manager Tom Balich.

Before the first Chicago batches, Welter fell in love with whiskey while visiting Scotland. His time spent overseas inspired his vision of innovating American whiskey by applying old world applications with modern styles of distilling. “Whiskey is so, basically, American; like Bourbon, like rye, the very American classic spirits,” explains Balich. “He wanted to keep it old but keep it new.”

Today, Welter and his production team handcraft clean, pure spirits from organic Midwestern grains in Three Oaks, Michigan. In 2011, Journeyman Distillery opened in the historic Featherbone Factory. Originally the factory was used to create Buggy Whips and Corsets in the late 1800s. Currently, Journeyman pays tribute to the past by appropriately naming their wheat whiskey Buggy Whip Wheat. Their 100% wheat whiskey displays the company’s ethics of honoring history while persistently innovating.

The balance between classic and modern is visibly apparent in the old, refurbished factory. “The feel of this place is an old building but with new ideas, new distilling equipment and a new style of distilling,” says Balich. The two copper towers of their 5,000L still stretch from the basement and through factory’s two stories. The classic charm of the building is preserved with tattered brick walls and reclaimed barn wood. A breath of fresh life is decorated by the stylish Staymaker restaurant. The top level is now multiple event spaces, separated by wooden beams and rustic wood from floor to ceiling. The modernization of the factory facilitates Journeyman’s ingenuity. 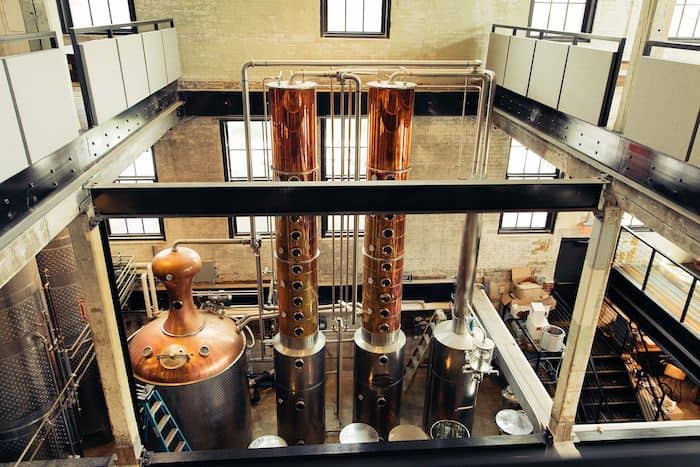 At their inception, Journeyman produced on 150L and 1,100L stills, but in 2015 they cut through the floors to make way for the 5,000L still and new fermenters. The distillery is continually pushing forward to provide engagement for their community and consumers. The new carved out space allows visitors to view the distilling process from each of the two floors.

“It’s never stopped. There’s no stopping at all to appreciate it,” joked Balich. “But the cool part of it is the constant challenges and the growth that is coming along.”

Balich joined Journeyman six months after they opened their doors in Three Oaks. He’s seen the company go from difficult times of keeping up with high demand to extending their markets from surrounding states to selling internationally. Balich anxiously joked that he felt like the entire business was going to go bankrupt on the days when a distillation was halted.

The beginning days for any distillery are tough, but Journeyman continued to craft their certified organic, kosher spirits, while furthering their pursuit on innovation. “If I’m not working on something new I’m probably in trouble,” jests Lead Distiller Matthew McClain. McClain joined the company three years ago. He shares Welter’s vision of growing through experimentation. “Just being able to experiment with all kinds of spirits and have somebody that’s encouraging has been great.”

The experimentation and launching of new products like their barrel aged gin (aged for nine months in new casks) and their Corsets, Whips and Whiskey coincides with the new production facility. The addition of the 5,000L still, 3 grain silos and upgrading to 10 fermenters created a schedule of consistency. The new still allows the production team to run two daily distillations, affording time for more new products while meeting supply and demand. “Why not try it? We have the capacity. We have the time, and you never know when you’re going to strike gold,” says Balich.

To strike gold, the distilling team travels back to the beginning stages of the company. “Everything generally starts small, then we grow it from there,” explains McClain. New products begin with small batches in the 150L still then transition to the 1,100L still to achieve a cleaner, consistent spirit.

Once consistent flavors are developed, the experimentation process continues with barrel selection. Currently, Journeyman is transitioning from craft-sized barrels to the industry standard of 53-gallon casks. “Aging-wise, I think a larger barrel with a longer aging time mellows the spirit.” says McClain. 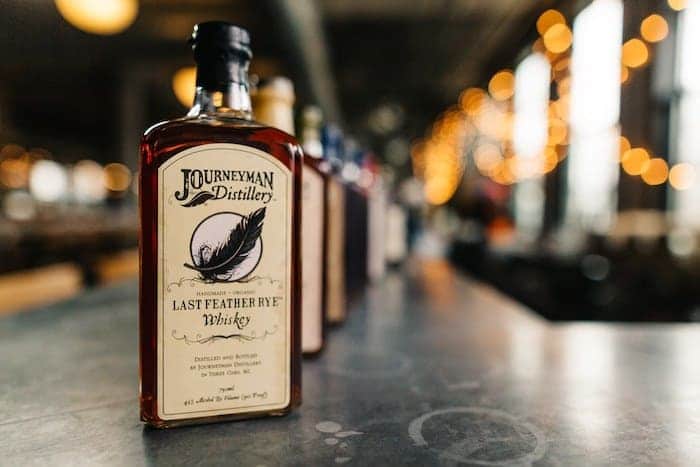 As new products continue to launch, and their core whiskeys like the Featherbone Bourbon and Last Feather Rye hold their flagship standards, Journeyman is always striving for consistency. “You know the quality is going to be there because it’s tough to be certified organic, it’s tough to source all these grains,” proudly says Balich. “You can be confident that all of our ingredients are the best quality, and we’re making very consistent whiskey.”

The consistency of their products carry from the Chicago barrel to the newest additions–500L sherry casks from Spain. Since 2016, Journeyman began growing specialty grains on Welter’s family farm in Putnam County, Indiana to produce their “Farm” Products. They’re experimenting with malted rye, a unique Bourbon mash bill–consisting of red corn and malted triticale as the secondary grain. The Farm Products are set for 10 years of aging, split between the weathered sherry casks and 53-gallon barrels. “Our goal with everyone of these Farm Products is to do something different that’ll be really good but really unique,” excitingly says Balich.

Journeyman’s core beliefs of risk, experimentation and consistency guide the distillery as they trail blaze a new landscape of whiskey in a modern explosion of everything craft.

316
Shares
916
Views
Share on FacebookShare on TwitterGet Our Newsletter
Get Jefferson's Ocean at ReserveBar. Shop now!