American whiskey marketing is a routinely cacophonous exercise in too many brands crowing about any significant or small change to its product line, distillery, personnel shift … you name it.

But you’ll not find Four Roses Bourbon numbered among the incessant hawkers. Too little has changed at the historic distillery in Lawrenceburg, Ky., since the bourbon brand began its rise from bottom shelf dweller to near cult status over the past 15 years. When there’s nothing new, there’s little to say, essentially. 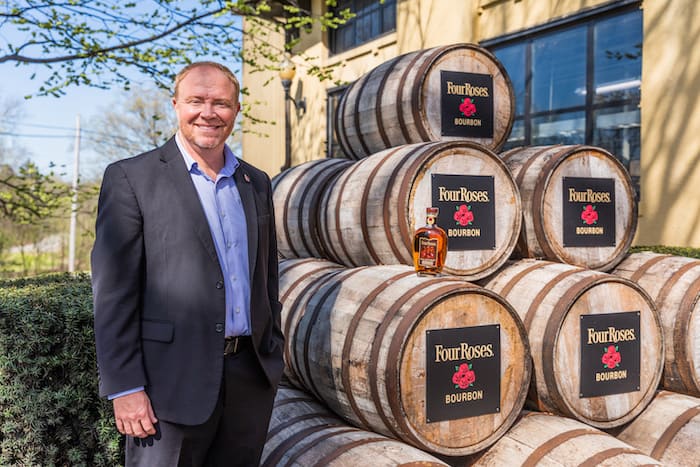 But on a recent crisp spring morning, below a dome of blue and the negligible shade afforded by some lanky redbud trees, Four Roses executives gathered to gab to crowd of 80 about the results of a $55 million capital injection from its owners, Japan-based Kirin:

Twelve years! It’s astonishing to think about when mega-bourbon brands roll out multiple new products at least every 12 months. You have to respect Four Roses’ unwillingness to join the flavor of the month club and stay focused on bourbon alone.

Or maybe not if you’re one of many who’ve believed for years that the distillery should add a rye whiskey to the portfolio. “When?” was a common question asked of past-master distiller Jim Rutledge during his run, and current master distiller Brent Elliott hears it, too. Yet the answer is still the same: bourbon is our focus.

Make no mistake, Small Batch Select is Four Roses through and through, but at midpalate it delivers herbal notes and spice like no other in the line. Elliott wanted the new release to be unique among its three standard offerings, and he achieved it by choosing whiskeys chiefly fermented using its V and F yeasts.

Perhaps a quick Four Roses yeast review is in order: The brand ferments its two mashbills with five different yeasts labeled with a single letter:

“This was a combination we’ve been toying with for a while because there’s something about how the F and V play together,” Elliott said. “We wanted a bourbon that has a fundamentally different flavor than our other releases.”

In the Al Young 50th Anniversary release, he said the V and F yielded mintiness and herbal characteristics. He wanted to probe those results further.

“Those flavors were the core of the idea behind the development of Small Batch Select,” he said. To add a little spice, he mingled in a whiskey made from the K yeast strain. “The K gives it a nice counterbalance,” Elliott said.

Given the aforementioned readily identifiable flavors of Four Roses, Elliott declined to call this modestly herbaceous derivation from the norm risky.

“No, for us, this wasn’t a risk. We’ve been pretty safe in how we’ve approached new products,” he said. “I mean, it’s been 12 years since we’ve tried something new!”

Even with vastly more production capacity, Elliott said Four Roses is in no rush to add subsequent line extensions. Drawing on a longstanding Four Roses talking point, he affirmed that “the (facilities) expansion was done to meet current demand.”

Translation: The brand is still playing catch up not only to the bourbon boom, but its much larger peers.

He did allow that perhaps down the road, added capacity and maturate “will provide more options if we decide to make new additions in the future.”

Such creations won’t be challenge, he said, given his access to barrels filled with all 10 of its recipes.

“We don’t have to plan too much in advance to create something unique unless it’s a rye or something totally different,” he said.

“That could be a possibility, too,” he said. “No promises yet, though.”