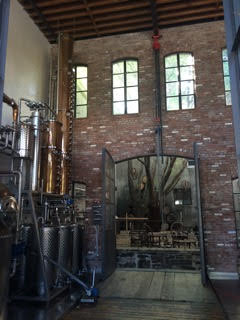 Dramatically different from the borough it was ten, even five years ago, Brooklyn is now rife with trendy bars, restaurants, and boutiques. That includes the industrial coastal neighborhood of Red Hook, an area you’d never even know was ravaged by Hurricane Sandy, where you’ll find the Widow Jane Distillery. Preparing to celebrate their third anniversary, Widow Jane is already stocked on most bar shelves in the New York area and making its way west.

Sharing a warehouse space with Master Distiller Daniel Prieto Preston’s Dominican chocolate factory, Widow Jane’s tasting feels like you just stepped into a fairy tale. Grand wooden beams and floors are merely a backdrop to one of the most beautiful copper stills I’ve ever laid eyes on, oddly complemented by a beautiful patio that houses chickens and a peacock. Yes, I do believe that this is the only craft distillery (and probably the only place in New York aside from the zoo) you’ll find a peacock with its very own outdoor entertainment space.

The space itself is so beautiful that it draws in passersby, which can be a little frustrating when people interrupt your whiskey tasting to ask about the chocolate production (and vice versa). However, if my biggest gripe is that they need more staff for all of the visitors, then Preston is obviously doing something right. 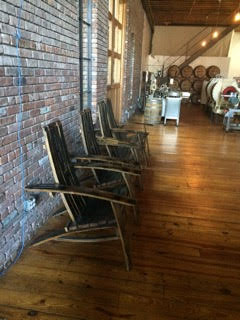 A former aerospace engineer trained in chemical engineering, Preston decided to channel his intricate knowledge into the production of his favorite spirit. The name is borrowed from his spirit’s water source, the Widow Jane Mine in Rosendale, New York. Preston believes that the water from the limestone caves has unique chemical properties that are “equal to that used by the most revered whiskey makers.”

While most distillers start out simple, Preston wanted to push the envelope with “New World” ingredients that were completely GMO-free, so he sought out various corn varietals to create his Widow Jane Heirloom Bourbon Whiskey. He decided to submit that bourbon to some spirit festivals, where they earned medals in two separate competitions and also caught the attention of Dave Pickerell, former Master Distiller of Maker’s Mark. This led to a mentorship relationship between Pickerell and Preston, solidifying his legitimacy in the bourbon production world.

The 8 Year Straight Bourbon Whiskey claims to drink like a “20 year bourbon,” and it’s pretty darn close. This bourbon is distilled and aged in Kentucky, and then proofed with water from the Widow Jane Mine. The rich, amber spirit was my favorite thing that I tried at the distillery, as it finished smooth with notes of orange and clove. 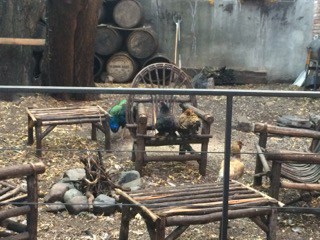 The Rye Mash was my least favorite, as I found just a little too smoky; however, my palate typically leans towards peated scotches and aromatic/dry whiskeys, so it’s perfectly reasonable to believe that someone who enjoys applewood-influenced products will really enjoy this.

Widow Jane also bottles its “Dregs,” the last inch of whiskey left in the barrels usually full of charcoal and sediment. Surprisingly smooth, these Dregs will certainly warm you up on a cold night. There are also countless other limited edition varietals that you can check out on their website or in person.

Widow Jane will continue to expand production and distribution over the next year, and even hopes to build a distillery next to the Widow Jane Mine that will be the United States’ first carbon-neutral spirit production site. Let’s just hope they also add more staff for all their eager tasting guests.

Walk-in tours of the chocolate factory and distillery are available on Saturdays and Sundays at 12, 2, and 4 p.m. for $15.00 per person (includes tasting). Private tours are also available by request for $25.00.

152
Shares
601
Views
Share on FacebookShare on TwitterGet Our Newsletter
Cheers to the Dads! Personalize a bottle of his favorite whiskey to create a modern gift for the modern man. Use code: FATHERSDAY20 for $20 off your next order of $100 or more at ReserveBar