Barrell Craft Spirits’ future distillery doesn’t inspire much romance from the outside. The last unit in a short row of anonymous industrial spaces on the outskirts of Louisville, the place looks like it could just as easily be a place you get your car detailed as a secret whiskey stash house. But appearances, here at least, can be deceiving.

Inside, founder Joe Beatrice informs me that the space was a server farm until not long ago. “The ventilation system they’d installed is incredible,” says Joe. “We hardly had to do anything at all to get up and going. Only now,” he says, and looks around at the crowded space, stacks of casks towering on all sides. “I’m thinking we might need a bigger boat.”

Founded in 2013, with its first whiskey hitting shelves in 2014, Barrell Craft Spirits has become one of the leading voices in the new wave of American whiskey. The Company has made its name with a head-turningly delicious series of releases, mostly bourbons with the occasional rye and American whiskey, assembled from sourced batches of whiskey from Kentucky, Tennessee, and farther afield.

Bottled at cask strength and offering high-amplitude, uncompromising flavor, Barrell’s whiskeys are racking up awards and selling out fast. Yet its success, in many ways, stems from breaking some of the most fundamental rules of the spirits industry.

Barrell doesn’t distill anything in-house (at least, not yet). Its packaging, while certainly attractive, is, like the building itself, utilitarian and understated, with an generic label modified for each release with hand-written age, proof, and batch information. And you can forget the conventional wisdom about product consistency. Barrell has never released the same whiskey twice.

Iconoclasts? Perhaps. But it’s working. Barrell is growing rapidly, so rapidly that the building they chose for their distillery might not be big enough after all. “We didn’t think it would be going this fast,” says Joe. “But it’s so much fun.” 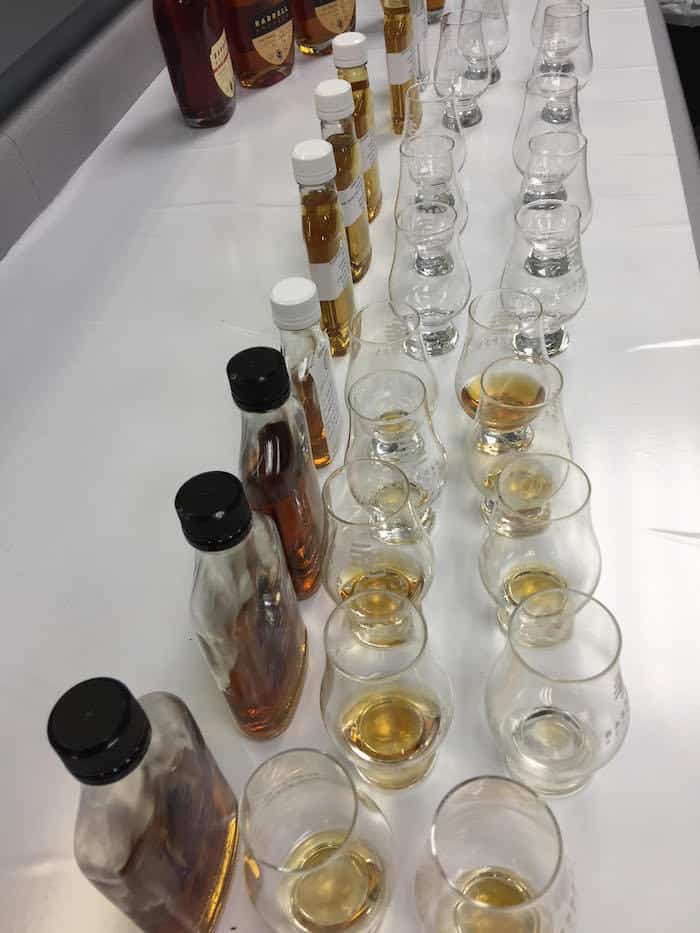 Joe says abandoning the notion of consistency, far from impeding Barrell’s growth, has been a key to its success. “You don’t ask somebody ‘What’s old?’ You ask them “What’s new?” says Joe. “Humans don’t necessarily want the same things all the time.” That means drinking Barrell whiskey is a little like walking through a rickhouse with a thief, a glass, and a healthy chunk of unsupervised time. Each batch is different, of course, but there are some common threads: cask strength bottling, no chill filtration, and big, bold, memorable flavors, often including a certain “juicy fruit” note that Joe says he’s particularly fond of.

For a vivid illustration of Barrell’s whiskey-without-borders philosophy, all it takes is a quick glance through this barrel warehouse. Used bourbon barrels rest alongside rum casks, port pipes, wine barrels, Cognac casks, curaçao barrels, sherry casks, and even amaro casks, each lending its own distinct note to whiskey inside.

“We look at spirits as flavor components,” says master distiller Tripp Stimson, formerly of Kentucky Artisan Distillery and a longtime consultant to the craft spirit industry. Barrell is in the process of building its own distillery, but even then, the company still plans to source the majority of its inputs. “We see our own production as a route to more variety rather than a way to achieve a consistent house style.”

After a stroll through the warehouse, we all decamped to the office for a tasting of Barrell’s latest whiskey, the Infinite Barrel Project. This “reverse solera” blends whiskeys from around the world and is never fully drained before being replenished with new whiskey, which means the flavor profile is constantly changing.

The contents of the current Infinite Barrel Project release read like a hot sheet from your local liquor store. The first release was a blend of Tennessee whiskey, Tennessee rye, malted Polish rye finished in curaçao casks, single malt Scotch, single grain Scotch, Irish whiskey, Indiana whiskey finished in sherry butts, and Indiana rye, in top-secret proportions. (It seems unlikely that anybody could assemble the stock to make a copycat whiskey, but I suppose you can never be too cautious.)

Tripp poured samples of the first Infinite Barrel Project release, an about-to-be-released second bottling, and the in-progress third batch, which Joe and Tripp were feeling pretty good about. We tasted at Joe’s desk, under a tongue-in-cheek engraved desk sign reading “Fucker in Charge of You Fucking Fucks” that hints at his decades in New York.

The first batch clearly showed its malt character, with an earthy flavor and nutty finish. The second was much more fruit-forward, with a sweet, desserty tone. The third, however, was the most beguiling, a delicate dance between rich malt and juicy, high-toned fruit anchored by a pencil lead-like minerality. We nose and sip silently for a while, taking it all in.

The Infinite Barrel Project is undoubtedly out there on the fringes of whiskey making, but even Barrell draws a line somewhere. “We don’t finish bourbon,” says Joe. “Because in my opinion, that’s no longer bourbon.”

“You can overdo it on finishing,” says Tripp, citing a recent experiment with finishing a whiskey in an amaro barrel. The result was so powerful that even a few milliliters dramatically changed the character of a test batch. “The two barrels we have will last 25 years,” laughs Tripp. 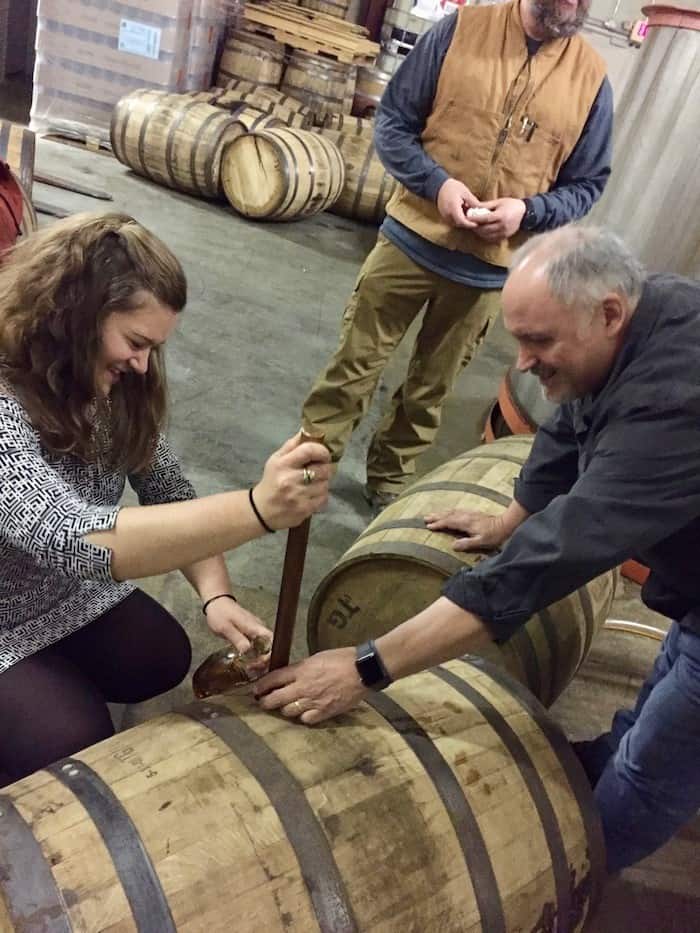 Barrell’s best known for whiskey, but its recent rum release, A Tale of Two Islands, might encapsulate its leave-no-idea-unturned ethos best. This Islay cask-finished Caribbean rum sounds like it would be a cacophony of pungent peat and high-ester funk, but it turns out that cranking the flavor knob to 11 on both sides actually produces a surprisingly harmonious spirit.

“I thought it sounded so disgusting,” says Tripp. “But it was actually pretty interesting.” Joe chuckles. “It’s a little love or hate. But if you don’t like it, we didn’t make it for you.”

Making any new blend, even just a bourbon vatting, at Barrell is no small task. Flavor inspiration comes from a variety of places: a particularly interesting batch of barrels the distillers have come across, a purely intellectual concept, inventory needs, or simply a desire to pursue a different idea than the last batch. Tripp says he and Joe sometimes taste through hundreds of test batches in search of the flavor they’re looking for. “Sometimes it happens right away, sometimes it takes a week or two, sometimes it takes a month.”

As we’re chatting, I notice that Joe hasn’t touched the rum. Instead, he’s still thoughtfully nosing the third batch of the Infinite Barrel Project. Then he looks up abruptly from his glass. “This is ready,” he says, with finality. “And it’s really good.”